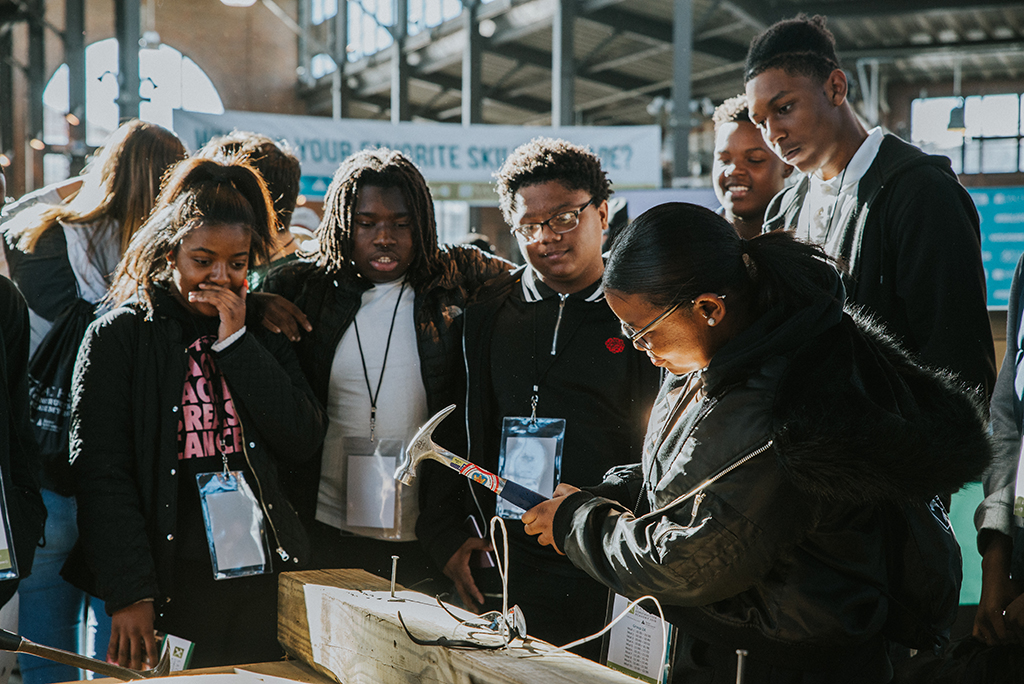 His Romulus High School classmates watched him as senior Nkegoa Ekokobe quickly scaled a steel beam set up Tuesday by the Irownworkers Local 25 Apprentice School in Eastern Market’s Shed 3. At the next table over, students donning safety glasses raced to hammer a nail into wood with the team from Manic Construction.

“It’s not about speed; it’s not about strength,” commercial contractor Anthony Joseph told the group as they hammered. “It’s about technique.”

More than 500 Detroit-area high school students Tuesday attended Sachse Construction’s third annual academy to learn about and connect with educational opportunities in construction, HVAC systems and other skilled trades. Faced with a shortage of workers in these fields, the industry is trying to change the narrative around these plentiful and often high-wage jobs.

“For too many years in our country, we’ve been telling people that they have to go off and get a university degree,” Gov. Rick Snyder said. “That’s a fine choice for people, but it’s not the only choice. (Trades workers) are making a difference in people’s lives. You’re going to see a great building built because of them, a great bridge, some project that they are going to look at for the rest of their lives and say, ‘I made that.’ That’s awesome.”

Todd Sachse, CEO of Sachse Construction, said he hopes this event will inspire youth to want to pursue these creative, hands-on careers.

“We literally lost a whole generation of people going into the skilled trades,” Sachse said. “A message got out there in the country that skilled trades are not a respectable career, which I think was a horrible thing led by our government, frankly, and the educational institutions. We’re trying to reverse that.”

Groups of students moved between 40 information tables and interactive demonstrations from 25 companies and organizations in the business.

For some, it could be life-changing.

“I think I want to do construction,” said Keyona Geiger, a sophomore from East English Village Preparatory Academy. “I didn’t think about it until today, but it looks fun. I like the idea of building something, and the income is good.”

For others, it was an eye-opening experience to the value of the skilled trades.

“I was surprised by plumbing,” said Shamartyana Reedus, a junior at East English Village who said she wants to become a hairdresser. “They can make like $60 per hour. I didn’t know you could make that without college.”

The construction academy began as a community event in 2016 to celebrate Sachse’s 25th anniversary, but Todd Sachse said teachers and school counselors have said it has become influential in expanding students’ career opportunities.

Kandace Jones, CEO of Junior Achievement of Southeast Michigan, a nonprofit youth organization that also sponsored the event, said survey responses from previous events show more than half of participating students have an interest in some trade afterward. This year, the academy also teamed up with Detroit at Work, which she hopes will connect students with educational opportunities and help the group to gauge interest following the event.Buy Photo

Irionna Lucas of Harper Woods High School tries hammering in a nail during the third annual Sachse Construction Academy at Eastern Market in Detroit on Tuesday. (Photo: David Guralnick, The Detroit News)
This is the second year Tracy Jones, a college team adviser at Martin Luther King Jr. High School, has brought students to the event. About 25 ninth-graders came along.

“I think it’s a great opportunity for our students to hear about various career pathways,”  she said. “We have some great vocational programs here in Detroit, so exposing our students, especially ninth- and 10th-graders, shows them they can be successful in their communities without necessarily going to a four-year university.”

If Makhi Blythe, a freshman at King, doesn’t become a professional football player, he said a skilled trade could help him become an entrepreneur.

“I want to be a businessman for real,” Blythe. “You can’t really tell me what to do. I’d like to be my own boss. I could see myself doing something like this.”

Three students at the event also won tickets to see the Detroit Pistons play in Little Caesars Arena. All high school seniors who attended also are eligible to apply online by Nov. 9 for a new $2,500 trades school scholarship from Shurtape Technologies, a tape manufacturer.

After monkeying up the steel beam, Ekokobe said ultimately he still hopes to become a software engineer.

“But I think I would like this, too,” he said. “I’m glad I could learn about these jobs because they’re important in the world.”