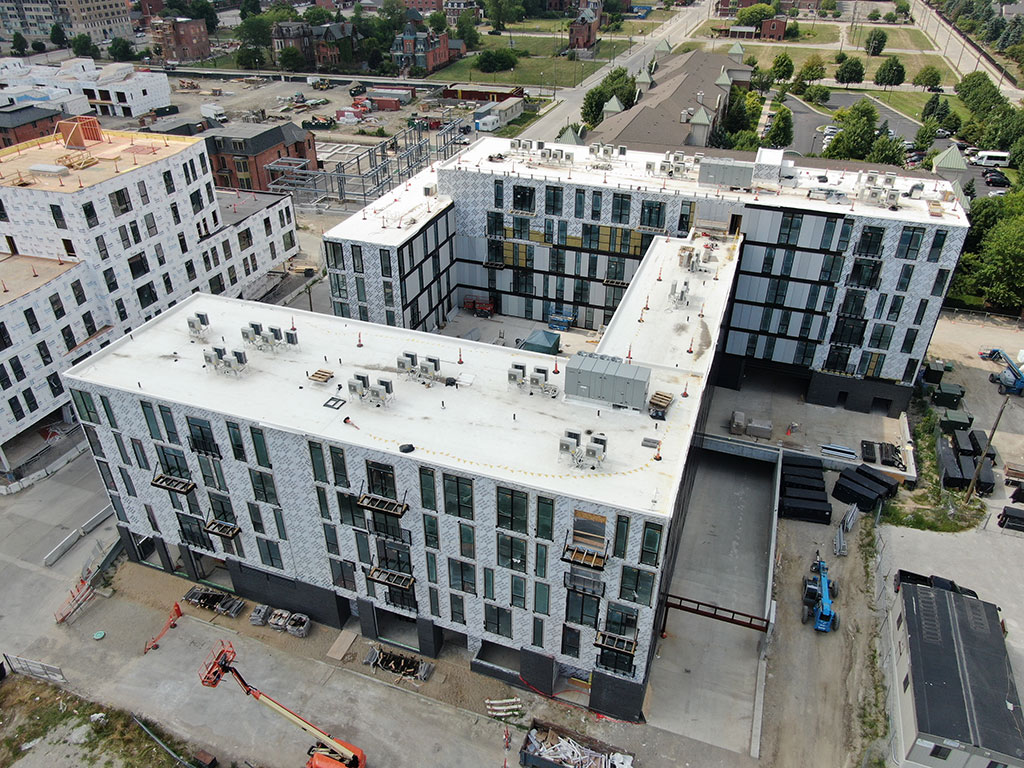 In Brush Park, construction on a large scale continues at a steady pace. Rows of townhomes and multi-story buildings are nearing completion, frames erected, awaiting cladding.

At City Modern—the 8.4-acre residential development that’s transforming the near downtown neighborhood—hundreds of townhomes, carriage homes, apartments, and historic home renovations are either complete or underway. Though the timelines have been pushed back slightly, City Modern is definitely progressing.

The first tenants moved into their homes in summer 2018. In April this year, the Flats at 124 Alfred were completed—the project’s first multifamily building added 54 units of affordable senior housing.

What’s been happening since then? We caught up with principal developer Bedrock and Hunter Pasteur Homes, who is constructing and selling the townhomes and carriage homes, to find out.

Buyers have the ability to customize their home with standard or upgraded finishes, as well as an optional rooftop deck.

Hunter Pasteur says the first phase of the development, the 39 townhomes and carriage houses south of Alfred Street, are nearly complete. The contemporary-looking units—with brick and metal facades as well as plenty of balconies, windows, and wood accents—all sold. One-hundred percent occupancy is expected by the end of January 2020.

Construction has begun on phase two of the 34 for-sale units near John R Street north of Alfred, and they’re expected to be occupied by the end of 2020. Phase three—the units closer to Brush Street—have a 2021 completion date.

There’s now also a phase four. What were originally planned as “duplettes” off Edmund Place will now be another 12 townhomes with red brick exteriors. “Because of demand, we decided to convert that plot from rentals to townhomes,” says Carol Gitlin, sales manager at Hunter Pasteur.

Of the 116 townhomes and carriage houses, an impressive 89 have already sold. The average price has been around $670,000 with the most expensive unit, a 3,450-square-foot townhome, going for $1.35 million.

Gitlin describes the buyers as “the most diverse group of people” she’s ever encountered, which includes “suburban migrators, empty nesters, young families, millennials established in their careers, and a few investors.”

As for the other multi-family buildings, Bedrock says it expects to start leasing for all of them in the first quarter of 2020. And much of the “mews”—a north-south green alleyway down the middle of the development—will be done by the end of 2020.

While some of these buildings originally had summer 2019 completion dates, steady progress has been made at City Modern. By the end of next year, expect to see a more fully formed, cohesive project.