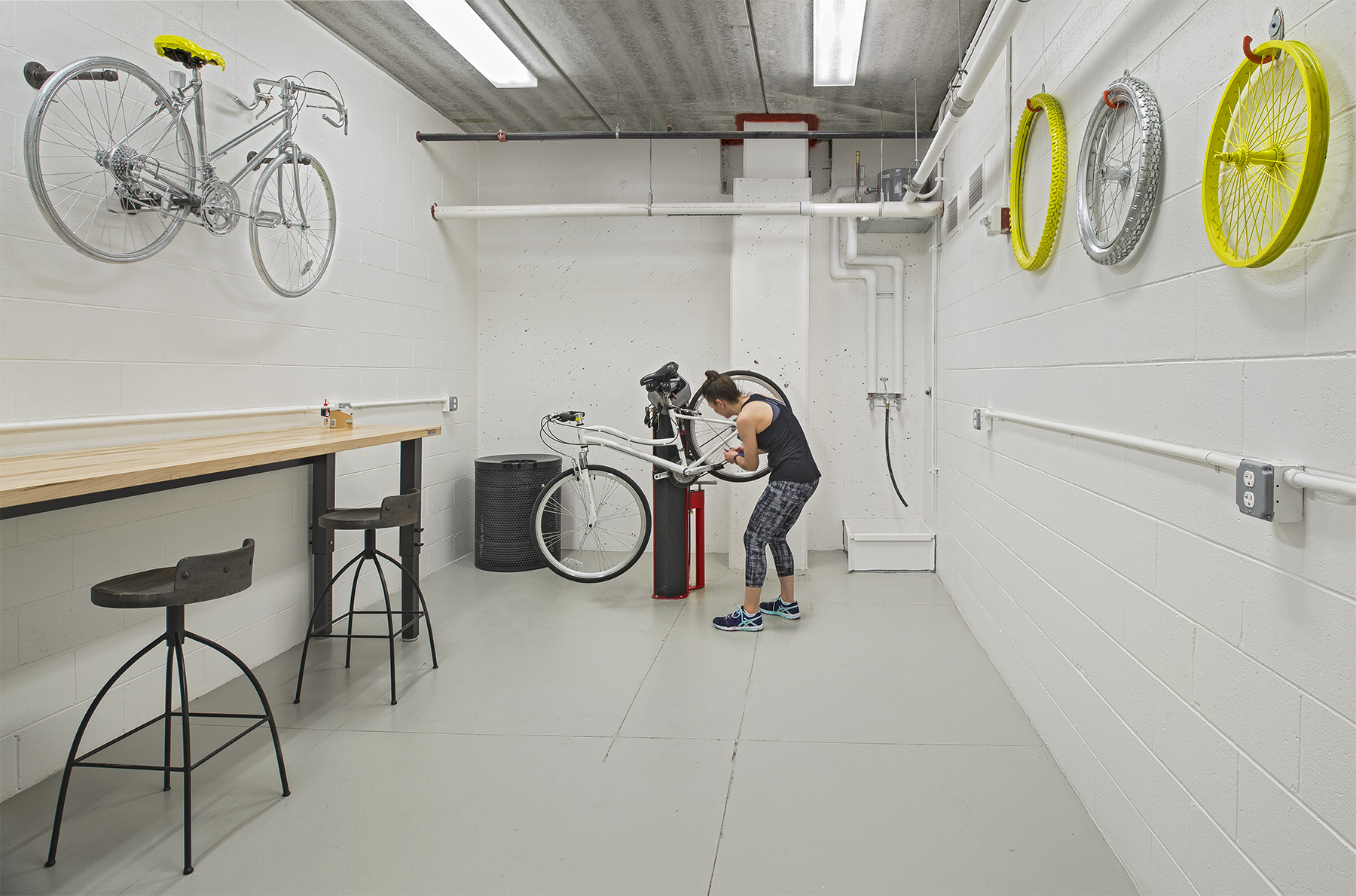 Bicycling has become a preferred means of environmentally friendly, fun, and healthy transportation for millions of America’s apartment, condo, and townhouse dwellers.

From 2008 to 2017, bicycle ridership in the U.S. grew 40%, from 47 million to 66 million, according to Statistica.com. Couple the dramatic increase in cyclists with the fact that U.S. households are renting at higher rates than at any time in the past 50 years, and multifamily developers and their project teams are left with no choice but to include bicycle storage and maintenance high on their list of amenities.

“Every project we design has bike storage of some type, whether it is standard racks on the street, individual private lockers, or hundreds of bikes stored in a stacker configuration in the parking garage,” said Nathan Sciarra, AIA, Associate Principal, KTGY Architecture + Planning, Denver.

A bicycle kitchen is a luxury amenity that is very appealing to a growing group of multifamily dwellers. “I would describe them as bicycle clubhouses, where like-minded residents mingle, collaborate, share stories and adventures, and create connections,” said Bobby Long, Principal, Kephart. Considerable thought needs to go into the aesthetics and comfort of bicycle kitchens.

According to the design experts we consulted, there are certain features no bicycle kitchen should be without: large-screen TVs with cable service, WiFi, comfortable furniture that encourages gathering and relaxation, good lighting, and bicycle-themed artwork that brands the space. (One even has a sculpture made from bicycle parts.) No self-respecting cyclist wants to hang out in a poorly lit, uninviting, eldritch space reminiscent of the local auto shop.

Storage and workshop aspects cannot be ignored. Space for tools and repair equipment, storage racks with ample clearance for loading and unloading onto cars, accessory storage for helmets and bags, and an area for washing bikes must be accounted for.

Creating the perfect bicycle kitchen is all about finding the ideal balance between a workshop and a social space, said Jimmy Sinis, Senior Design Manager and Senior Associate, Stantec.

“Spaces like this foster a sense of community among residents,” said KTGY’s Sciarra. “To be considered a full bicycle kitchen, the design must incorporate comfortable seating, entertainment opportunities, and more. Then it’s more a kitchen than a repair space.”

Not every multifamily project needs a full bicycle kitchen, but bicycle storage of some kind has become a necessity for most new apartment and condo enterprises.

Ratios, Ratios, It’s All About the Ratios

Then there are those pesky zoning requirements and resident-to-space ratios to consider. Having too little—or even too much—room can impair the functionality of bicycle storage areas.

According to Sciarra, the ideal ratio depends a lot on where the project is located. In urban areas with easy access to stores, restaurants, and entertainment venues, one bicycle space for every two units should work. (According to Ira Mitchneck, AIA, Senior Associate, New York–based Dattner Architects has found this ratio to work just fine in its projects, which are primarily in dense urban areas.) In suburban locations where more residents probably have a car, the ratio can be lowered to one storage space for every four or five units, said Sciarra.

“We don’t believe the correlation is that simple,” Sciarra said. “In our experience, the number of parking spaces and bike storage is driven more by location and the bike culture of that location.”

Kephart’s Long agrees. “I don’t think we’re looking at any specific ratios,” he said. “Each project is so specific, based on adjacency to bike lanes and paths and the specific bike culture.” Meaning whether—and how much—residents use their bikes for commuting, shopping, recreation, and physical training. “It’s certainly not a one-size-fits-all approach,” said Long.