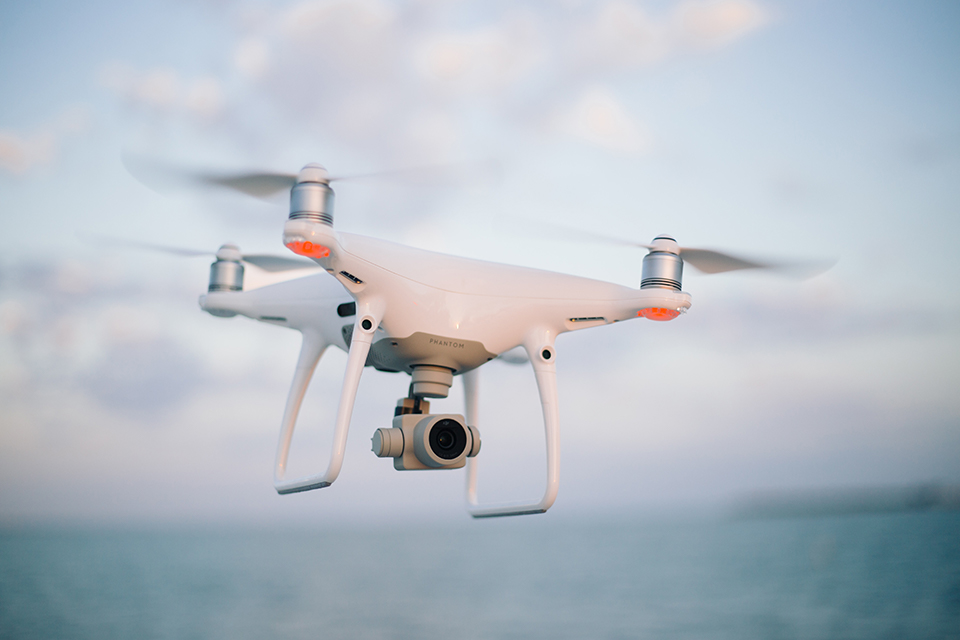 Drones provide construction teams with an overhead view of jobsites, materials, machinery and people. Contractors are using the autonomous flying machines to record images and videos that help optimize everything from grading plans and operations to identifying differences between as-designed and as-built site plans. Their usefulness can be enhanced with thermal cameras and other add-ons like mapping tools and GPS units.

Also called unmanned aerial vehicles (UAVs), drones can be fully or partially autonomous but are usually controlled remotely by a human pilot on the ground.

Because UAVs provide a bird’s eye view of a jobsite, they offer builders a range of benefits that can’t be matched by any other technology, and the top applications in commercial construction are for logistics, progress monitoring, as-built surveying and marketing, said Dustin Williams, CEO and founder of FlywheelAEC, a reality capture service provider based in San Francisco. Among other projects, his company provides weekly drone flights over the Raiders’ Allegiant Stadium jobsite in Las Vegas.

“The old adage that a picture is worth a thousand words has never been more true,” Bill Bennington, PCL’s national quality manager, told Construction Dive.

For marketing purposes or for client updates, drones can capture detailed, close-up images that are not possible with a photographer on the ground or even in a helicopter, Burton told Construction Dive. “It’s also a much safer solution than taking pictures from a crane and more affordable than a helicopter flight,” he said.

UAVs are also useful tools for accident prevention, according to Drone Enthusiast. Overhead images showing erection sequences, crane locations or perimeter security can help pinpoint where projects get congested and even predict where hazards could pop up. The improved transparency and collaboration decreases inefficiencies that often lead to a reduction in change orders, Williams said.

Unpiloted UAV systems such as the University of Michigan’s autonomous system that nails shingles to a roof, are also upping drones’ usefulness for construction pros.

What you should know

Before implementing a drone program, it’s important to select the right model for the job, starting with the choice of fixed-wing or rotary. With an airplane-like design, fixed-wing drones can glide on a set path and reach higher altitudes, making them efficient for mapping topography and surveying greater distances, according to Big Rentz. However, fixed drones are only able to fly forward.

For closer aerial inspections and photography, rotary drones are the better option since they are easy to control and their rotating blades allow them to hover and remain stable.

Contractors also need to know that despite the perceived low barrier to entry due to the affordable cost of consumer drones, many specialty technical skills are required, as well as professional-grade hardware and software, said Williams. There are dozens of apps that help control and program drones; a recent JBKnowledge report found that the top three apps were DJI Go, Drone Deploy and Pix4D.

“Having a drone program is becoming essential; but having it implemented internally is not practical for everyone,” Williams said. “If implementing internally, contractors should budget money and time appropriately to go from R&D through implementation.”

That said, he added, many contractors would benefit from partnering with a specialized drone service subcontractor. These specialists can help decide the best products and approach for the specific project and ensure that local and federal regulations regarding the use of airspace are followed. They also have trained and FAA-licensed operators.

A newly proposed identification system for commercial drones will help expand usage in the United States for everything from drone-delivered packages to emergency medical supplies. The FAA’s Remote ID system, announced late last month, will require the vast majority of drones in the U.S. to broadcast tracking signals that will help authorities to identify their operators and locate them, according to a press statement.

“Remote ID technologies will enhance safety and security by allowing the FAA, law enforcement, and federal security agencies to identify drones flying in their jurisdiction,” Transportation Secretary Elaine Chao said in the statement.

When the new regulations hit in a few years, according to the Washington Post, FAA compliance for drone operators will be more important than ever, Burton said. “Companies will need to make sure they have proper clearance, insurance and licenses before flying,” he said.

Drone technology rapidly continues to evolve and bring new applications and benefits every month, but the quick pace of innovation can also be a drawback for contractors who are trying to keep up with the changes, Williams said.

A few other challenges include: