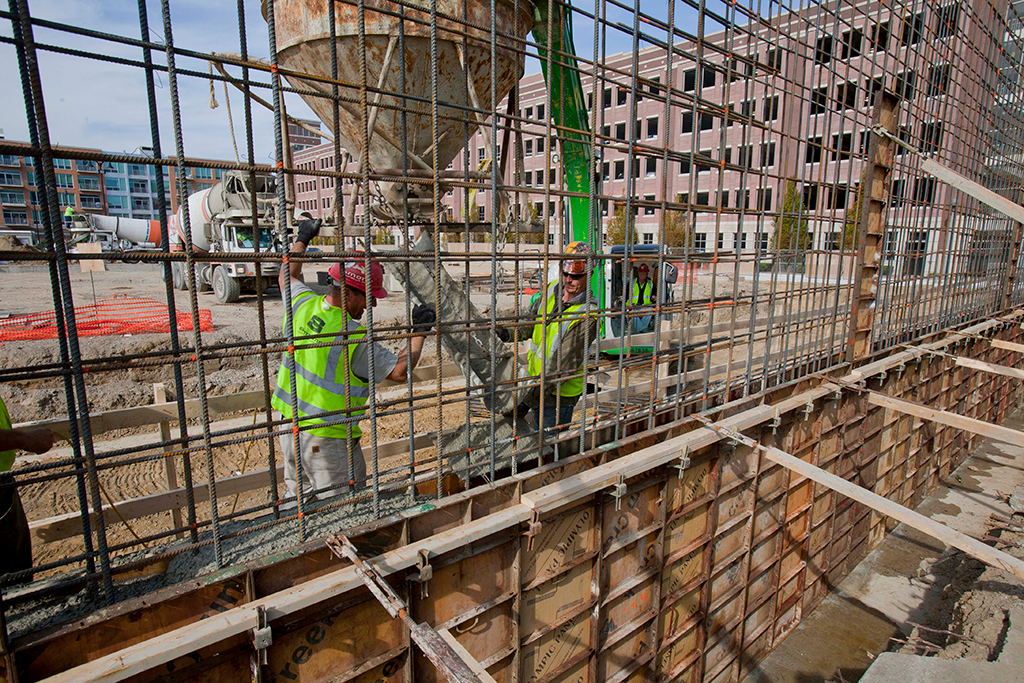 On the north end of Howell, the men and women who will help construct Detroit’s next skyscraper, a tunnel under the Straits of Mackinac and rebuild Michigan’s crumbling roads and bridges are learning how to make precision cuts into the earth and maneuver cranes for jobs where inches matter.

The Operating Engineers Local 324 trains heavy equipment and crane operators on a sprawling 550-acre plot of land in the exurbs that the union started building a half-century ago on the north side of M-59. On any given weekday, dozens of excavators and bulldozers roll across the forested training ground, as apprentices and journeymen practice operating increasingly high-tech machinery.

The union’s business of training apprentices is booming with 400 active apprentices. “We’ll be at 500 before we know it,” said John Hartwell, apprenticeship coordinator for the Operating Engineers.

The Operating Engineers are about to break ground on a 19,000-square-foot, nine-classroom addition to their training center. The union anticipates years of increased demand for its skilled workers to build the Gordie Howe International Bridge, billionaire Dan Gilbert’s Hudson’s site skyscraper and replace the countless bridges in Michigan that are deemed structurally deficient.

But most will have a long trek out to Howell to learn how. It’s the only heavy machinery training facility of its kind in Michigan funded in partnership with infrastructure companies — and probably can’t be easily replicated to make this particular trade more accessible to an interested worker in Detroit or Dowagiac.

In the push by state policymakers and employers to steer more young people into once-stigmatized skilled trades, the limitations of the existing infrastructure for training workers combined with a fractured network of apprenticeships and training programs has surfaced as a new clog in the talent pipeline.

“The space you need to do what we’re doing and the amount of noise we’re making, we need to be tucked away in Howell,” said Dan McKernan, spokesman for the Operating Engineers Local 324. “It’s not just something you drop in a city block.”

The shortage of skilled-trades workers has exposed how few training facilities there are in Michigan after decades of high schools closing down career and technical education programs.

“I think we’re continuing to pay ramifications for that,” said Jim Sawyer, president of Macomb Community College, which offers skilled-trades programs in building construction and welding.

‘It shouldn’t be this complicated’

The state also lacks any kind of centralized, easy-to-navigate system for actually breaking into the trades, much less finding work-as-you-learn apprenticeships offered by unions like the Operating Engineers, said Roger Curtis, who recently left Gov. Rick Snyder’s administration after two years as the state’s talent and economic development director.

Curtis said he realized this was a problem last year while speaking to a group of high school counselors about advising their students on career opportunities in skilled trades.

The group of educators asked for more information on how students could get into apprenticeships and training programs to become electricians, plumbers and computer-assisted machinists, Curtis said.

Curtis said he and a state Department of Education official produced a list of five websites for the high school counselors to mine for information to guide their students’ career choices.

“It just struck me: How can you ask a counselor who already averages 729 students per counselor and has no time … and now we’re going to tell them to go to five different websites to get the information?” Curtis said. “I think there is a need to streamline this.”

Union contractors and labor unions operate a little-known organization called Management and Unions Serving Together, or MUST, and a website that is supposed to serve as a recruiting tool.

“Anyone outside of our group would have no idea what that acronym stands for,” said Tom Ward, apprenticeship coordinator for Detroit Metropolitan Masonry Local 2’s training center in Warren for bricklayers and masons. “You (tell a potential recruit), ‘Go to the MUST website to learn about the building trades,’ and they’re going to look at you and say, ‘What does that mean?'”

Colleges have a common application that high school students can navigate through a smartphone app. There’s not a similar tech-savvy entry point for getting into the skilled trades, Ward said.

“This is a challenge of ours, for sure,” Ward said. “It shouldn’t be this complicated.”

A simple Google search for “skilled trades near me” — like an 18-year-old high school senior might try — brings up a disparate menu of choices.

Sachse thinks the solution to fixing the fractured system is to consolidate skilled trades programs under the roofs of the state’s 28 community colleges, using a well-established educational infrastructure to help recruit and feed the talent pipeline.

“If we can concentrate those various skilled trades (at community colleges) … it raises the level of, I’ll call it, social status of those professions,” Sachse said in an interview for the Crain’s “Detroit Rising” podcast.

Most community colleges in Michigan already offer a mixture of skilled-trades training programs. But it’s hit-and-miss.

Oakland Community College, for example, offers a construction management certificate and associate degree, but has no carpentry program.

Community colleges could provide “a much more organized and controlled environment” for skilled-trades training and teach prerequisite courses in math that most of the construction professions demand, Sachse said.

“I think it’s better for the unions and the trade schools because No. 1, it’s concentrated,” Sachse said. “… These unions should be able to partner with (the colleges) and, in some ways, help fund that training.”

One of the reasons there is a fractured training pipeline is labor unions have built apprenticeship programs over decades in partnership with certain businesses, while community colleges and private, for-profit trade schools have carved out niches for themselves in select markets.

And union apprenticeships are limited by design, as both unions and employers tend to be conservative in how many people they train.

“We take in what the market can handle and what we can train,” said David Poletis, statewide training director for the Michigan Regional Council of Carpenters, which has seven training centers across the state, including two in Ferndale and Warren.

Apprenticeship programs restrict hiring in deference to journeymen and to ensure they’re not overstaffed.

“We don’t bring anyone in unless there’s jobs waiting for them,” said Ward, whose union runs a four-year brick and masonry restoration program with a starting wage that jumped from $14.11 to $20.67 per hour in June because of a shortage of new recruits for the physically demanding trade.

Union apprenticeships and community colleges as well as private trades schools have different missions and guarantees for apprentices.

Unions tout their superiority in linking their training to earn-while-you-learn jobs.

“The community colleges can provide us (apprentices) with better off-the-street training,” Poletis said. “But they can’t provide our on-the-job training.”