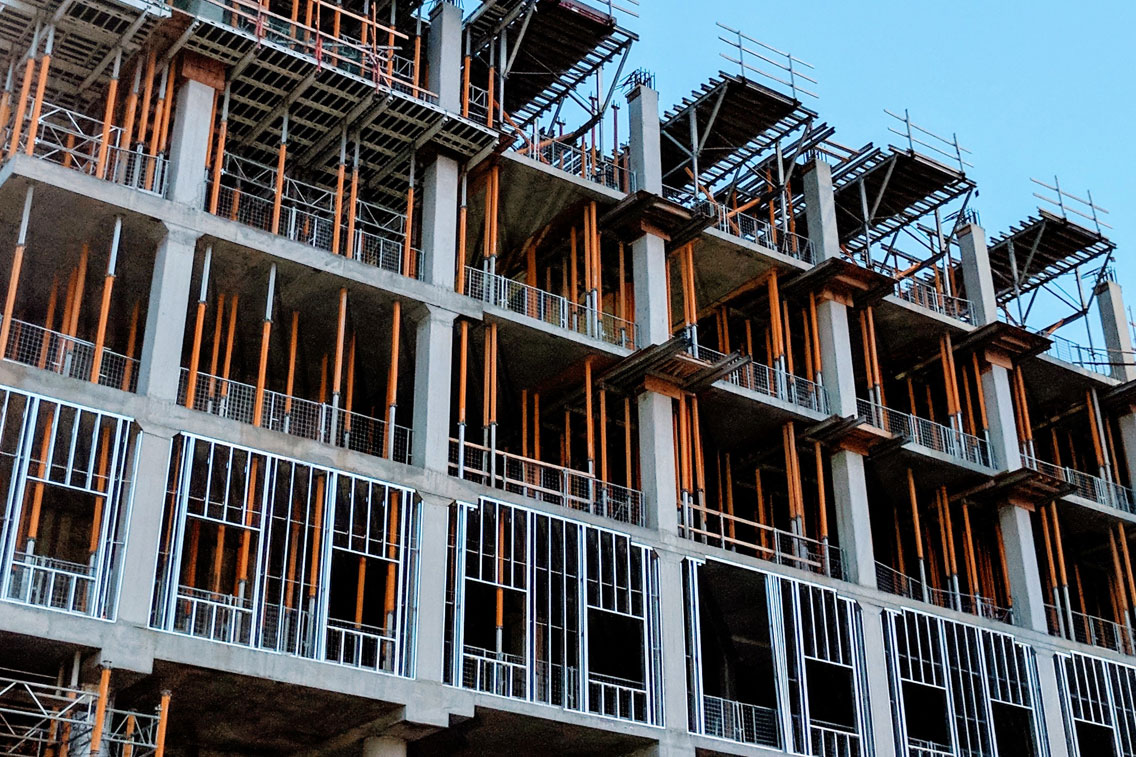 Hype for modular construction has hit a level of ubiquity.

It seems like every month another prefabricated hotel tops out at a record height for the delivery model, or a city official lauds the practice as the panacea for affordable housing — and the labor pinch — or a new offsite-based startup follows Katerra in stacking up investment funds.

But for every modular-related headline, there’s a project supervisor barking safety orders at a crew on a cold jobsite who is thinking of modular as niche and questioning the impact it has on the industry as a whole.

In other words, she’s asking, “Why would modular matter to me?”

This new column sets out to answer that, putting in place one deep-dive installment every month to create a comprehensive overview of where the business model is (and isn’t) making inroads, what opportunities are on the horizon and how much your business stands to be disrupted.

To start, here’s an overview on where modular fits in the industry now.

But if that’s what you’re imagining, you’ve missed out on what’s been going on behind the scenes of a quiet revolution, Swanson says.

In the background, various conventional builders and new entrants have been shifting more and more of their process indoors to manufacture elements of a building in a controlled environment. The parts — be it wall panels, bathroom pods or an entire hotel room with all finishings — are then delivered to the site and pieced together like Lego blocks.

Almost all buildings involve some prefabrication, or offsite production. But when it comes to full three-dimensional structures that are built almost entirely offsite, known as volumetric modular building, the segment has wrangled about 4% of the market and, in 2017, drove approximately $7 billion worth of construction activity, according to the Modular Building Institute. There’s potential for about 10% around the corner, some experts say.

Modular’s exemplaries such as Skender, a 64-year-old conventional builder at its core, are looking at the method of assembling 90%-complete buildings offsite as a way to solve fundamental societal challenges one module at a time.

It’s what society is demanding, according to presenters last month at the Modular Building Institute’s Offsite Construction Expo (OSCE) in Washington, D.C.

The workforce shortage is sustained, multifamily units are in short supply in many cities and there’s an imperative to build faster across all sectors as developers seek quicker returns on investments, Salvatore Verrastro, principal of Spillman Farmer Architects and American Institute of Architects representative, told OSCE attendees.

To build faster and more efficiently, modular promises to tease out the complexities of traditional contracting, which involves handing off responsibilities from one player to the next. It promises to incorporate quality assurance, code reviews and inspections at the manufacturing site, which speeds up the process and gets the building’s owner a quicker ROI, which is crucial for the hotel industry in particular, Verrastro explained.

Modular endeavors to meet the particular demands of segments such as housing, healthcare and hospitality and more through the undisputed efficiencies of manufacturing.

So if a city like Skender’s Chicago is in a sudden pinch for 300 more hospital beds, the modular builder wants to get the human-assisted robotic arms on its factory floor cranking out one room after another as soon as it secures design permits. A kitchen can be fitted with MEP and appliances while the podium is placed in situ.

Workforce fluctuations are more stable in a factory setting, and less workers are required in a modular building facility, which is partially automated. When you put welders and pipe fitters and electrical engineers on an proper assembly line, Swanson added, it’s less like “indoor construction,” and more like product manufacturing.

Developers are taking particular interest in modular builders that provide an “easy button,” for them to press when needed, Swanson continued.

“Modular construction is the wave of the future, and we all need tools on how to do it.”

“Right now, we’re signing design-build contracts for the majority of our clients,” Swanson said, explaining how the general contractor has incorporated licensed modular architects, zoning experts and subcontractors in-house to form one entity that can take an owner’s idea from plans to production to put-in-place construction.

“Rather than navigating and fighting the complexities of having all design and all subcontracting done by different firms and the jobsite work being done by a GC … we’re producing buildings, full stop.” Not to mention that all the trades are trying to eek out their own margins, Verrastro mentioned.

Swanson likens it to the way that a car maker would deliver 300 automobiles — all with relatively the same chassis, yet endless customized variables — from one assembly line to a client’s sales lot, he said.

That’s because, he continued, “The bones of almost every building are the same.” Structural systems, plumbing, wet walls and other underpinnings are relatively identical, and can be codified for maximum efficiency.

An integrated modular builder wants to eliminate the idea that an architect should ever be toiling away at ensuring a toilet is at a code-compliant minimum distance away from a wall, for instance, when that process could be standardized.

The 33 building orders in Skender’s pipeline are all unique and relevant to their sites and their contexts, “as you would expect any well-designed building to be,” he said. “But if you cut the facades off, you’re going to see a pretty standardized system behind it.”

Time savings from the modular method are proven. Simply by assembling buildings one piece or module at a time through simplified, repetitive processes on advanced automation equipment, “Recent modular projects have already established a solid track record of accelerating project timelines by 20% to 50%,” according to McKinsey & Co. That doesn’t even take into account the environmental and logistical variables of traditional construction that offsite building eliminates.

But what many traditional builders want to know is, does modular save money?

With conventional and modular buildings, “I think we all agree that costs are comparable,” Verrastro continued. “It’s the same code and the same material.”

Yet when modular builders are able to reduce overhead, save on procurement through having dedicated suppliers and minimizing waste, save on labor costs, capitalize on economies of scale and supply chain ancillary benefits — which McKinsey says equates to about 25% savings — the value in the proposition has less to do with thinking about “upfront per-square-footage costs,” and more about “all the other stuff,” that adds value, including quality.

The quality control in an indoor environment, he added, “is phenomenal” when compared to what’s carried out on a typical jobsite that’s exposed to the elements and a flurry of trades competing for limited space.

So rather than a focus on savings, modular proponents have turned to “cost certainty” as the method’s champion. The design is frozen once the schematics hit the factory floor, explained OSCE panelist Kendra Halliwell, associate principal, Icon Architecture. The price at the design stage is the guaranteed price.

In that vein, change orders are nearly unthinkable, which greatly reduces costs. That is, of course, a double-edge sword, according to the OSCE speakers. The upfront design process and coordination among all players involved, similar to design-build, or in some case, integrated project delivery, is “intense,” Verrastro said.

Design-build as a delivery method has been praised as winning for this very reason — for getting all stakeholders into the same room to delineate the scope, scale and schedule. The modular process is even more intensive, as it makes change orders “difficult, costly and nearly impractical,” Verrastro said.

When that team of stakeholders is condensed to one entity — as is the case for an integrated modular builder like Skender, the process is more streamlined and concise, Swanson said. And that “easy button” appeal to owners, of, say, a student housing building that needs to go up and be ready for move-in over the course of a summer break, could just be what contributes to traditional builders’ loss in market share.

Despite the interest in modular building and offsite construction, the industry has been slow to adopt it because it is not ready for what it sees as a bonafide disruptor, the panel continued.

Modular building is not without its caveats, the panelist agreed, and this column will take a critical look at some of the disadvantages to consider in later editions, but there’s always a reason to try to incorporate at least some offsite building practices.

And so while upstarts like Skender, Prescient and Katerra seek to “challenge the industry as a whole,” as Swanson put it, there may be a more nuanced approach that benefits not just the disrupters and those developers looking for an easy button, but traditional builders as well, and that may just be the most important takeaway, Verrastro said.

Because while the focus on modular tends to hone in on full-volumetric permanent modular structures, Verrastro continued, a lot of the industry is in fact switching to hybrid approaches that combine both traditional and offsite methods. GCs can partner with offsite builders, or prefab component manufacturers of 2D panels or parts — such as full, customized bathroom pods or a combination of the two. It may complicate contracts, and it always must be decided before the foundation is set, but hybrid may just be the way to go in order to capitalize on the efficiencies modular can offer, Verrastro concluded.

Either way, modular building is set to disrupt the industry in increasing ways, and the McKinsey report may have put it best. “All players should evaluate the trend and impact, and assess their strategic choices, to ensure they can benefit rather than risking being left behind.”

Stay tuned to this monthly column as it takes a deeper, nuanced and sometimes more critical look at the modular movement, and feel free to email me your thoughts, concerns and ideas on topics to cover in this series.