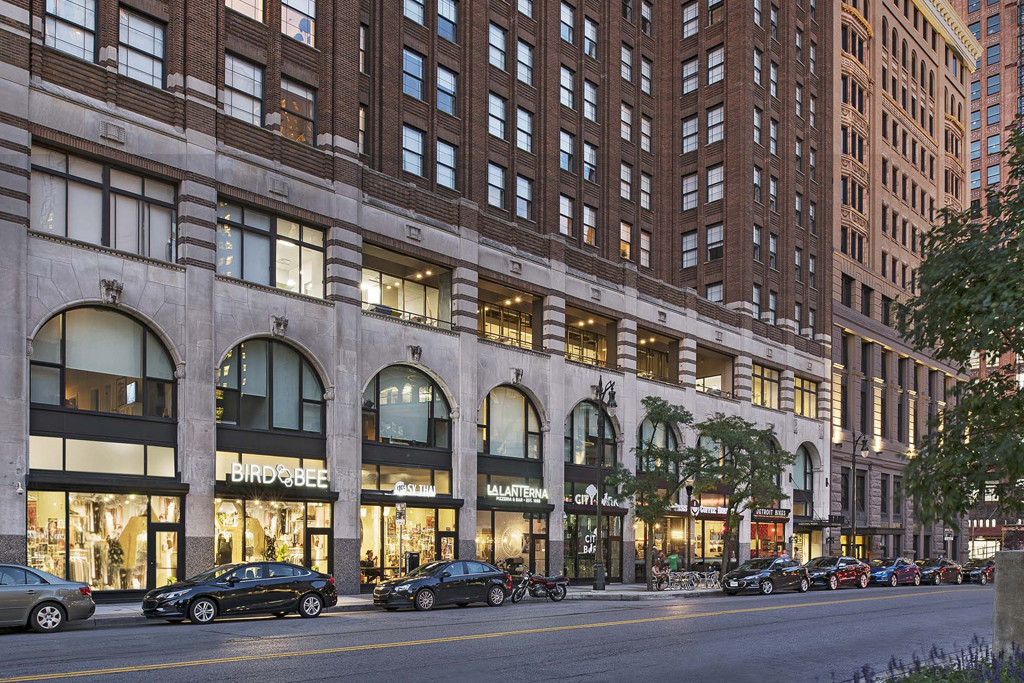 Today, Detroit looks starkly different than a decade ago. The city was hit hard by the Great Recession, but shortly thereafter, businesses started moving their operations into the downtown corridor. Businessman Dan Gilbert moved Quicken Loans into its downtown headquarters in August 2010, bringing approximately 1,700 employees with him. Today, Quicken’s footprint has expanded to 17,000 employees working downtown. Other companies followed, such as when we moved our headquarters downtown in 2012.

As the city has regained its footing, retail has helped bring people into the downtown corridor, both from around the city and from out of the suburbs. To date, Woodward Avenue and Capitol Park have been the two main hubs of retail activity in downtown Detroit, with once-vacant buildings housing national brands and unique entrepreneurs. As these two neighborhoods become more populated, retailers are starting to look for other neighborhoods in Detroit with potential to be redeveloped into standout retail options.

This begs the question: can other neighborhoods in Detroit flourish and support retail, beyond the central business district? As Detroit’s renaissance expands to other neighborhoods throughout the city, we expect there to be more opportunities ahead. Any incoming retailers and developers should consider what categories may be a good fit for growth outside of the downtown core, and what challenges remain for the city’s evolving landscape.

The key consideration today is density. Before a neighborhood can accommodate new storefronts, especially any kind of destination retail, there needs to be density to support it. Residential growth will be the spark to light the retail flame. New shops will follow, popping up where people are living.

With that being said, here are a few areas of Detroit with retail potential.

Midtown Detroit stands out because it’s ahead of the curve in terms of becoming a hot spot like the already-developed pockets along Woodward and Capitol Park. There is more retail in Midtown than those two segments of the city, but the offerings are not as concentrated. Midtown is home to cultural fixtures like the Detroit Institute of Arts, the Detroit Public Library and the Masonic Temple. These iconic city stops elevate foot traffic in Midtown, necessitating the many restaurants throughout the neighborhood and service offerings like Whole Foods Market.

This is still an area to watch, particularly around the Fisher Building at West Grand Boulevard and Woodward Avenue. A large swath of space south of Grand Boulevard consists of former storefronts, for instance. While these are mostly vacant right now, there is little doubt they will begin to fill in.

Residential expansion in Midtown’s New Center is a driving force, with The Boulevard at Third and Grand, Baltimore Station 1 and other residential and mixed-use projects in the pipeline. Along with the new Pistons practice facility, which includes a Henry Ford Health System-sponsored regional medical facility and a Plum Market grocery store and café, these developments help drive more opportunities in and around the New Center area.

Jefferson corridor between Grosse Pointe Park and the Marina District

A walkable commercial corridor along Jefferson Avenue shows promise for growth. This most likely will be neighborhood shops and restaurants, but also leaves the door open for services that will elevate the community.

There has been promising growth at 6 Mile Road and Livernois Avenue, with new bakeries, attention-getting restaurants and popular brands. Both private development resources and a more general civic commitment are responsible for the changes in the neighborhood. There’s a noticeable buzz about the potential to bring back a section of the city that once had a great deal of retail cachet and was known colloquially as Detroit’s “Avenue of Fashion.”

Northwest of the central business district, 8 Mile Road and Woodward Avenue is primed for future developments following the city of Detroit’s purchase of 142 acres of the former state fairgrounds in summer 2018. This area is an existing neighborhood destination with names like Meijer, Foot Locker and Planet Fitness. More momentum is expected in the months and years ahead.

The Corktown area has been getting a significant amount of attention lately, especially along Michigan Avenue, thanks to the recent announcement from Ford Motor Co., which plans to update Michigan Central Station and relocate facilities and personnel to the area in the coming years. The development could bring 2,500 new jobs to this part of Detroit, with future growth likely.

While the clear trend in the central business district seems to be mid-to-upper level brands, from Under Armour and Nike to Warby Parker and John Varvatos, the future of retail will look a little different in the surrounding neighborhoods. We will likely see more strictly middle-market retailers with diverse offerings to meet the needs of all the people who live in these areas.

Truly, the residential boom in downtown Detroit bodes well for the introduction of more community-focused service retail — coffee shops, small grocers and other daily necessities. These types of retail options will become more commonplace over time, but we aren’t quite there yet. Residential density is on the rise and with new developments announced all the time, I expect we’ll see these types of retailers finding their place in the city sooner than later.

Regardless of what (and where) the next big thing will be for Detroit retail, the potential for creative and serviceable options is something that will keep the city’s evolution fresh and exciting for years to come.