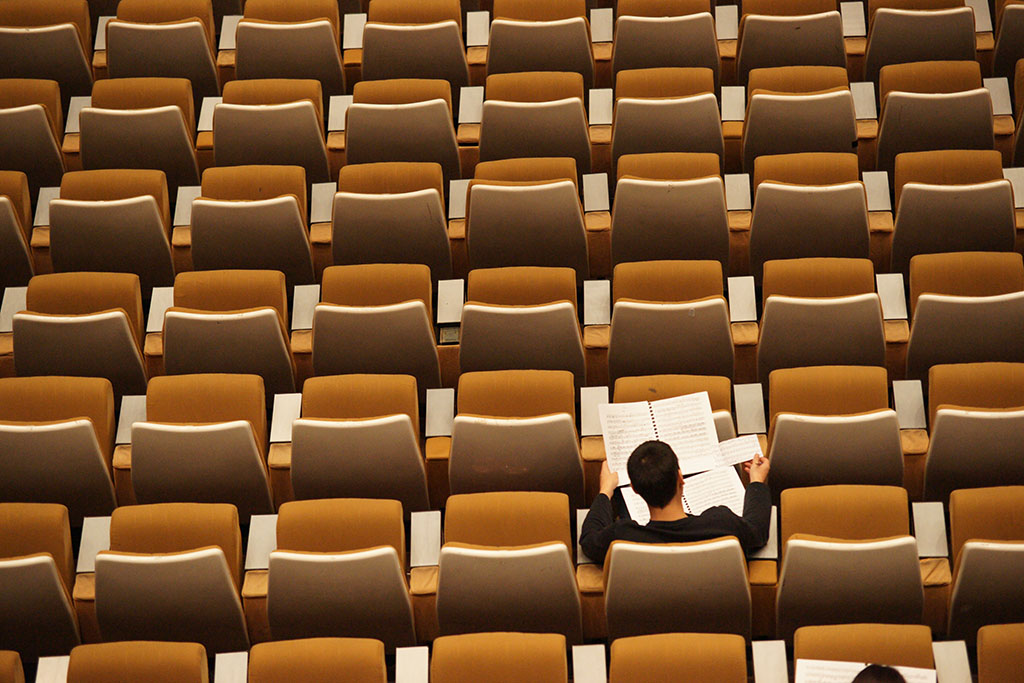 In rural Iowa, just one of the 875 students on Cornell College’s campus has tested positive for the coronavirus this semester. At Amherst College in Massachusetts, the number of undergraduate virus cases has been a bit higher: three.

And Colby College’s rigorous measures have so thoroughly contained the virus that students like Logan Morrione can wander on and off the Waterville, Maine, campus, attend most classes in person and even do without masks in some social situations — privileges that students elsewhere can only dream of.

“At first, we weren’t allowed to see anyone except for our roommates, but now it’s kind of free range,” said Mr. Morrione, a 19-year-old sophomore. “Honestly, it’s not that terrible.”

As campuses across the country struggle to carry on amid illnesses and outbreaks, a determined minority are beating the pandemic — at least for the moment — by holding infections to a minimum and allowing students to continue living in dorms and attend face-to-face classes.

Being located in small towns, having minimal Greek life and aggressively enforcing social-distancing measures all help in suppressing the contagion, experts say. But one major thread connects the most successful campuses: testing. Extensively.

Small colleges in New England — where the Broad Institute, a large academic laboratory affiliated with M.I.T. and Harvard, is supporting an ambitious regional testing and screening program — are showing particularly low rates of infection. But some larger schools elsewhere also have held the line, even in densely populated areas, often using their own labs.

Duke University in North Carolina, with 17,000 students, has recorded 75 confirmed cases among students and employees since early August, even as early outbreaks forced its neighbor colleges, North Carolina State and the University of North Carolina at Chapel Hill, to move instruction entirely online for the semester.

The University of Illinois at Urbana-Champaign, too, appears to be back on track after its twice-weekly testing program made news for underestimating the odds that some of its 40,000 or so students would party even when they knew they were infected.

The resulting surge in cases was followed by a crackdown on gatherings and a series of student suspensions; now infections are plummeting and the campus is again relaxing restrictions.

“They’re showing how you can keep a state school open during this pandemic, and that’s something people can copy — if it lasts,” said Carl Bergstrom, a professor of biology at the University of Washington and an infectious-disease expert.

The success stories stand in relief against all that has not worked.

Hoping to offer some semblance of a normal college experience despite the coronavirus — and to recoup significant financial losses from earlier in the pandemic — more than a third of U.S. colleges invited students back for the fall, offering socially distanced campus housing and at least some face-to-face classes. Within weeks, however, campuses had joined cruise ships, nursing homes, prisons and meatpacking plants on the short list of coronavirus hot spots.

Research indicates that fast, widespread and frequent testing of people with and without symptoms is the best way to pinpoint and stop potential outbreaks. People infected with the coronavirus are most contagious in the days before they display symptoms, and up to 40 percent of infected people are asymptomatic, according to research and the Centers for Disease Control and Prevention. A recent C.D.C. report found that testing and other mitigation measures might have averted at least one of the early campus closures in North Carolina.

But mass testing is costly and vulnerable to backlogs — private labs can take days and charge up to $150 to process a standard nasal swab test. It has also received mixed support from federal health officials, who have largely left states, cities and campuses to devise their own programs.

In an analysis of reopening plans that looked at some 500 universities this summer, a team from the California Institute of Technology found that 54 percent were performing some coronavirus testing and 27 percent were testing undergraduates upon re-entry. A smaller percentage — one college in five — planned to do regular testing.

Many schools, the survey found, echoed Trump administration health guidance in choosing to limit testing only to students who are symptomatic, arguing, for example, that mass testing on campus that included asymptomatic students would create a “false sense of security.”

A. David Paltiel, a professor of public health policy and management at the Yale School of Medicine who was an author of a study recommending twice-a-week testing, called the mixed messages from the Trump administration and the C.D.C. “an unmitigated disaster” that had confused college officials.

One thing that is working has been the partnership between the Broad Institute and more than 100 colleges in New England, which are testing students frequently and paying $25 to $30 per test to have the samples processed overnight at the institute’s lab in Cambridge, Mass.

The program has allowed Colby College, with about 2,000 students on its rural Maine campus, to test each student before and after arrival on campus, then twice weekly thereafter, using a nasal swab PCR test that takes less than three minutes to conduct. Faculty and staff are also tested twice weekly. So far, the campus has had 11 positive tests, a few of which turned out to be false positives, said David Greene, the school’s president.

In one case, the testing identified a student who had apparently caught the coronavirus on the way to campus and did not have a sufficient viral load to test positively upon entry, he said. By the time the infection was caught in the next round of testing two days later, contact tracing revealed that a roommate had been infected.

At Wesleyan University, another Broad Institute partner, twice-weekly testing has helped tamp down the infection rate both on and off the Middletown, Conn., campus. With nine positive tests in more than six weeks, Wesleyan’s president, Michael S. Roth, said the 2,900 students in campus housing could now move freely between the campus and the town.

“Size does matter,” Mr. Roth said, noting his is a small campus in a small city where bars “are on a short leash.” Wesleyan also lacks the level of Greek life that has led to outbreaks at larger institutions.

At Delaware State University, a historically Black college with about 1,800 of its 5,000 students living on campus this semester, partnerships with the nonprofit Testing for America and the Thurgood Marshall College Fund, among other nonprofit groups, have enabled twice-weekly testing. That, in turn, has freed the school to offer some classes in person, and to continue housing on campus hundreds of vulnerable or low-income students who might have had nowhere else to go, Tony Allen, the school’s president, said.

Less than 1 percent of tests have turned up positive, and none have been the result of community spread on campus. “There’s a heightened sensitivity here and at other H.B.C.U.s in other parts of the country because of the disproportionate impact the pandemic is having on the community,” he said.

Some larger schools with their own testing programs also are keeping rates down. Duke tested every student upon arrival, weeding out some positive cases before they could get onto campus, said a university spokesman, Michael Schoenfeld.

Duke has allowed about 3,000 students — about half of the usual number — to live in campus housing, and has limited off-campus students to campus buildings where they have classes. The sororities and fraternities do not have independent houses, Mr. Schoenfeld said, and are housed in the dorms.

Every student who lives in a dorm or comes onto campus is tested at least once a week, on average, as part of the school’s pool testing surveillance, and athletes in high-risk sports such as football are tested daily, he said.

A few schools have leveraged culture or geography to limit test expenses.

At Cornell College in Mt. Vernon, Iowa, student exposure to infection is naturally limited by the school’s “block” system of classes, in which students study one subject at a time in groups of 15 for periods of three and a half weeks.

When one employee tested positive, Mr. Brand said, the school quickly tested every contact, including nearly all of the students in the block cohort. A half-hour’s drive away, the University of Iowa, which has cited “a false sense of security” in opting against mass testing, has been among the state’s most persistent coronavirus hot spots.

In Poughkeepsie, N.Y., Vassar College asked the 2,070 students on campus this semester to be cleared by a coronavirus test before they arrived. Every student was tested again upon arrival, again a week later, and again every two weeks since. So far, 31 people have tested positive, with a test positivity rate that is a fraction of a percent.

The trade-offs are that students must stay on campus, except for emergencies, and that nonessential visitors cannot come in — a strategy that Vassar’s president, Elizabeth Bradley, likened to New Zealand, which has also largely thwarted outbreaks.

But for many students, sequestering is proving to be an ordeal.

“It takes a psychological toll, and a sexual toll,” said Lily Popoli, a 19-year-old sophomore at Amherst College, where the 930 students are confined to socializing in small groups within “the bubble.” Despite thrice-weekly testing and three confirmed infections among students, the college has declined to relax bans on gatherings and dorm visits — as have other schools, including Colby.

“They’ve encouraged people to snitch, so you don’t even want to hang out because you might be reported for pulling down your mask for even a second,” Ms. Popoli said.

In quiet moments, she said, she can hear party noise through her window from a house full of University of Massachusetts students nearby who enjoy more lax safety measures.

“‘Yo! Amherst kids! Come over! Come have a normal life! We got beer pong,’” she says they yell at her. “I’ll be honest — I would have never come back if I’d known it was going to be like this.”