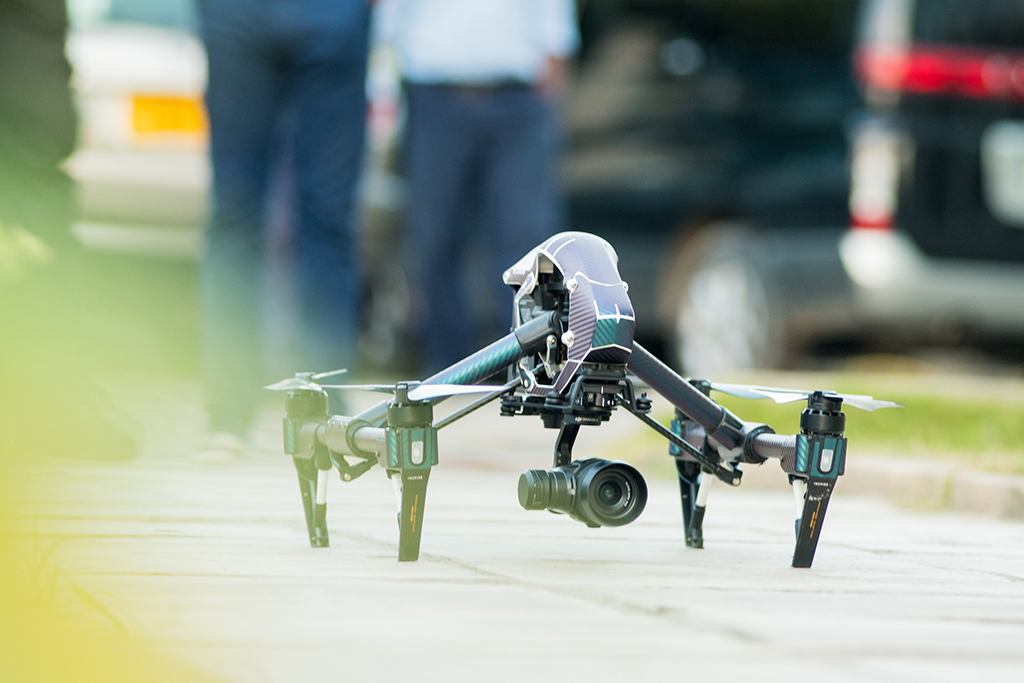 The National Aeronautics and Space Administration’s Langley Research Center wants to find solutions to challenging tasks in GPS-deprived environments, so it put a group of MIT students on the problem. The students came came back to NASA with a plan for a fleet of drones that can autonomously fly through a forest, communicate with one another and stitch together a 3D map of the environment—all without hitting trees or using GPS.

The quadcopters used in the experiment have onboard laser-range finders for positioning and planning their routes as they pilot themselves. They use a technique called simultaneous localization and mapping (SLAM) to position the drones in space and scan the environment at the same time. Algorithms guide the drones so they map efficiently and avoid re-mapping already covered ground. Captured data is sent via WiFi to the researchers’ base station where all the drones’ maps are stitched into one.

“We’re using an RGB camera and off-the-shelf object detector running a neural network internally to pick up objects in an image frame,” says Yulun Tian, a graduate student in the Department of Aeronautics and Astronautics at MIT. One of the student’s immediate goals is to train the airborne system to spot missing hikers and send their coordinates to the ground station, although at the time of his experiment that part of the research has not yet been done.

John M. Russo, a surveyor and president of the U.S. Institute of Building Documentation says that the crossover for construction could be big—like automating messy plenum space surveys or getting 3D laser scans of daily construction progress with the push of a button.

“That’s the big problem inside of a building—no GPS,” says Russo. “You could deploy drones to quickly map a building, and if you’re doing photo imagery you could use that data for pre-bid walks.”

Tian agrees with Russo that the crossover with construction may be a more practical use of the technology at this stage.

One challenge his team ran into with flying without GPS was distinguishing one location from the other. “Trees can look pretty similar,” says Tian. “But a bunch of trees will become a unique signature. We use onboard LiDAR to identify the trees and compute the configuration of the trees and use that as a unique signature of the place.”

And although WiFi was used to communicate between drones and the base station, that may not be available in either a remote forest or job site; but Tian has an idea for that, too. “Instead of WiFi, we could add a transmitter to the vehicles. As soon as the vehicles are close enough that they can detect each other they’ll establish a communication link and collaborate”, says Tian. All the navigation and localization would be done onboard, so no other communications would be necessary until the drones returned to base.

But even if the team has a solution to the GPS problem, there are other obstacles still to be overcome, and battery life is a big one. “The flight time in our demo was two to three minutes,” says Tian. He adds that flight time can go up to 10 minutes, but that’s it, given the weight of the onboard laser scanner.

Russo says he knows there are hurdles to jump, but he sees a lot of promise with MIT’s research. “You could send drones out every day or week and map the site changes, generating 3D reports that could be used for clash detection or in paying subs based on a percentage of completion,” says Russo. “If they’re able to sense obstructions and not run into things, you could erect new steel members without worrying the drones will run into them.” The technology could even be used in protecting the general contractor in disputes, because the progress would be documented in a laser scan and time stamped.

Russo says all of this could be done now with a piloted drone, but the labor to go through a building and scan and do thermal imagery is beyond most budgets. “If you could automate these things with autonomous drones, it’s affordable and you get this info fast and you could do things that are currently cost prohibitive.”